Behind on Your Mortgage? How about Getting a Free House? 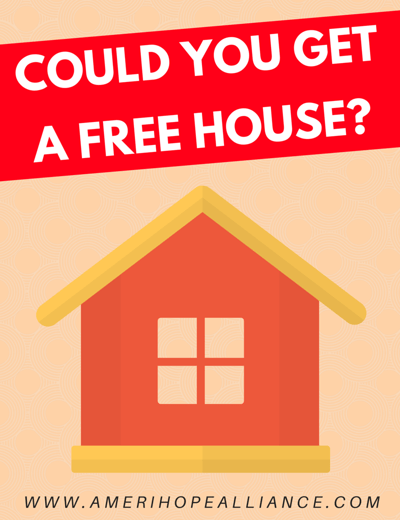 Many homeowners have lost wages or experienced some hardship or hardships that caused them to fall behind on their mortgage payments. They're in desperate need of a solution before they're foreclosed on. Searching for any hope in a sea of despondence, they wonder if there's a way they could get their house for free.

These homeowners want to know if there's any way their house could be given to them as a form of retributive justice for all the illegal and unethical things their bank has done. There certainly doesn't seem to be a shortage of that. We've all heard the stories about predatory lending, robo-signing, and fraudulent foreclosure. Could that somehow be cause for a free house?

No. You won't get your home for free because of any bad behavior by the bank.

However, there is a technicality that could allow a homeowner to get their home for free.

A number of homeowners in Florida want to know if they could get their home for free if they don't pay their mortgage for five years. That may sound absurd to you, but there's a reason people think that.

Florida has a 5 year statute of limitations on foreclosures. A lender has five years to enforce a promissory note after a home goes into default. If the mortgage has an acceleration clause, which lets the lender demand the balance of the mortgage after a default, then the five-year period starts when the acceleration clause is activated. If a foreclosure lawsuit isn't filed within those five years, the homeowner could get their home for free.

Florida also has a rule stating that a foreclosure lawsuit can only stay open for one year when there's no activity in the case. After a year with no activity, the court can dismiss the lawsuit. If the foreclosure suit is dismissed before the lender requests a deficiency judgment the bank can't enforce a promissory note and the homeowner could get their home for free.

So it's technically possible to get your house for free, and it has happened. But it's extremely unlikely.

Hoping for a miraculously free home as a result of a technicality isn't an effective strategy for keeping your house. A better option is to try to modify your loan so that it is returned to normal but with a more affordable payment. A loan modification is the only option available for homeowners who don't have the cash to reinstate their loan, but who want to keep their home.

Loans can be modified through the federal government's Home Affordable Modification Program (HAMP) or a bank's own in-house program.

You don't have to be behind on your mortgage payments or in foreclosure to be eligible for a loan modification. And it doesn't cost anything to apply or get modified.

The downside is that most who apply on their own are denied and the application process can be difficult. You have to submit an application to your loan servicer with a lot of paperwork that documents your financial situation. Homeowners often complain that the bank asks them to submit the same documents multiple times. The bank will say they lost the documents or even the entire application. It causes a lot of stress in what's already a very stressful time.

To have the best chance of getting what you need, you might consider working with an experienced professional who deals with these problems for a living. The right attorney can defend you from foreclosure in the short term while working for a loan modification as a permanent solution.

It may be tempting to fantasize about getting your house for free, but it's not productive or likely to ever happen. It is very possible, however, to keep your home with a more affordable payment by getting a loan modification. Our firm has helped thousands of clients avoid foreclosure and get their mortgages back on track.

People who haven't paid their mortgage in years and are tens or hundreds of thousands of dollars behind on their loan with a foreclosure sale date looming have modified their loan and kept their home. It might not be as good as free, but it's the next best thing.