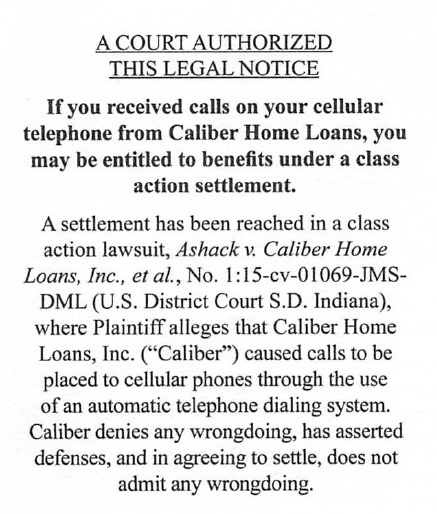 Some of our clients were recently sent legal notices from a claims administrator notifying them that they may be entitled to benefits under a class action settlement with Caliber Home Loans.

As their attorney of record, these notices were sent directly to us. The notice consists of two postcards. One provides details on the settlement, and the other contains a settlement claim form that can be filled out and dropped in the mail.

The information from the front of the notice is on the right.

It tells you that someone named Ashack sued Caliber for themselves and on behalf of all the people who received calls on their cell phones from Caliber from an automatic dialing system which violated the TCPA, or Telephone Consumer Protection Act, and Caliber agreed to pay money to settle. Now the money from the settlement will be approved by the court and then distributed.