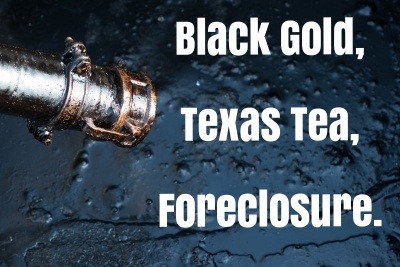 Anyone who drives a car has noticed that gas prices are dramatically lower than they've been in years due to lower oil prices. While we're all happy that filling up our tanks is easier on the wallet, there is a down side: cheap oil can cause people who make a living in the oil industry to lose their jobs, and their homes to foreclosure.

When the price of oil plunges, companies in the oil business or businesses that service or support them, lay off some workers or pay them less. Those workers are more likely to be unable to afford their mortgages payments and fall into foreclosure. The oil business is employs a lot of people, so when it suffers, a lot of workers can suffer.

And the oil industry has been suffering mightily. Two years ago the price of a barrel of oil was more than $100. Now it's about $30. By some estimates, that enormous drop has caused as many as 250,000 people to lose their jobs when you account for all the engineers, workers in the field, support workers, and businesses that support them and rely on their spending. That means that there are a lot of people who are not benefitting from cheap oil. 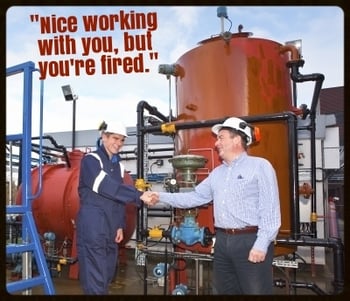 The rate of foreclosures has been steadily falling in recent years. Nationwide, foreclosure was down 3% in 2015 compared to 2014, but in some states whose economies have experienced an oil and natural gas drilling boom, the rate has been increasing. Texas' foreclosure rate was up almost 16% in 2015, and North Dakota's was up 387%. That's a very big deal.

The effects of cheap oil extend to the whole energy industry, from natural gas and coal to renewable energy like solar and wind. The more expensive oil is, the more affordable alternatives are by comparison. America has seen an a boom in natural gas production recently, which is made profitable by the high cost of oil. With oil so cheap, why pay for coal, invest in costly natural gas drilling, or spend money on solar panels? You probably don't. That's expected to hurt coal producing states like West Virginia and put downward pressure on the entire energy industry and stocks. So cheap oil doesn't just help drivers at the pump, it affects the entire economy, sometimes in a bad way.

Why is Oil So Cheap?

The price of oil, like everything, is based on supply and demand. Right now, the world is experiencing a double-whammy of oversupply and reduced demand. The oversupply is a result of robust production from many countries around the world flooding the market. The reduced demand seems to be coming, or not coming, from the slowing growth rate of the economies of China and some European countries.

Benefits vs Costs of Cheap Oil

So there are negative consequences of cheap oil, but don't forget the positives. The money drivers are saving on gasoline will eventually be spent somewhere, though most seem to be saving it at the moment. And low oil prices usually have a positive effect on car sales, so states involved in car manufacturing should benefit from higher sales.

Cheap oil means every product or service that uses it at any stage in its manufacture or shipping should be cheaper. Plane and train tickets should come down in price since fuel is one of their biggest costs. Hopefully retailers, manufacturers, and service businesses will pass on some of those savings to consumers.

Economics seems like a zero-sum game sometimes, like squeezing one end of a balloon only to make the other end expand. Cheap oil helps some, but hurts others. You just hope you're not the one being squeezed.

If you live in a judicial foreclosure state like New Jersey, New York, Pennsylvania, Illinois, or Florida, consider hiring an attorney who can defend you from foreclosure to give you all the time in your home you're entitled to. You may qualify for the Home Affordable Modification Program (HAMP), which can help you permanently lower your monthly mortgage payment to an affordable portion of your income.

Whatever the reason for falling behind on your mortgage, and what state you live in, you should take action as soon as possible so you have the most options for resolving your situation in the best way.

Images courtesy of anankkml and Serge Bertasius at FreeDigitalPhotos.net