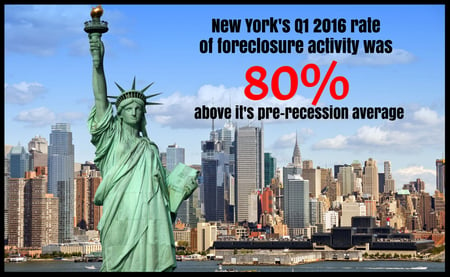 “More than one-third of the 216 local markets we analyzed were below their pre-recession foreclosure activity averages in the first quarter, and we would expect a growing number of markets to move below that milestone the rest of this year, while the number of markets with a lingering low-grade fever of foreclosure activity continues to shrink,” Daren Blomquist, senior vice president at RealtyTrac, said.

However, some states and regions areas are having a worse time than others.

In the first quarter of 2016 the New York metropolitan area had a rate of foreclosure activity that was 80 percent above its pre-recession average.

Among the 216 areas across the nation that were analyzed for the report (only metro areas with populations of 200,000 and up were considered), only six reached new foreclosure activity peak levels in the first quarter of 2016. And three of those were in New York, including the Syracuse, Utica-Rome, and Binghamton metropolitan areas.

Nationwide, scheduled foreclosure auctions increased in March by 25% compared to February, but were down 15 percent from March 2015.

New York was among the 23 states that had a year-over-year increase in scheduled foreclosure auctions for the month of March, with a 92% increase. But March typically sees more foreclosure activity. According to Blomquist:

“February is of course a shorter month, and banks often ramp up foreclosure filings in March to take advantage of the spring selling season — which should prove particularly favorable to banks this year given low inventory levels of homes for sale and continued strong demand from buyers regaining confidence in the housing market."

It could be a lot worse. The Empire State's neighbor, New Jersey, is second worst in the nation with one in every 216 housing units having a foreclosure filing in the first quarter of 2016. 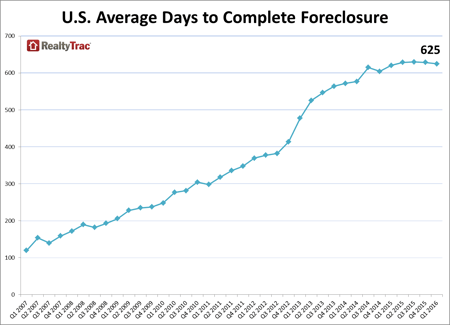 Homeowners can use the longer time afforded them by New York's judicial foreclosure process to their advantage by working toward a loan modification or other resolution while the wheels of foreclosure are turning.

A loan modification is a permanent change to one or more of the terms of your loan, such as the interest rate, length of the loan term, and the amount of principal. For homeowners in default who want to keep their property, but can't afford to do so unless their monthly payment is lowered, a loan modification may be their only hope.

The bad news about a loan modification is that the majority of people who apply for one on their own are denied. It takes a lot of work to make your case to the bank that you are worthy of keeping your home. You have to document your income, write a hardship letter, and provide information about all of your debt.

You can increase the odds of getting your loan modification approved by working with an experienced professional, such as an attorney. The best attorney would be one that can help you with your loan mod and defend you from foreclosure at the same time. That way you may be able to spend many months or years in your home without making a payment while you work toward a permanent solution.