Are We Headed Toward Another Recession? 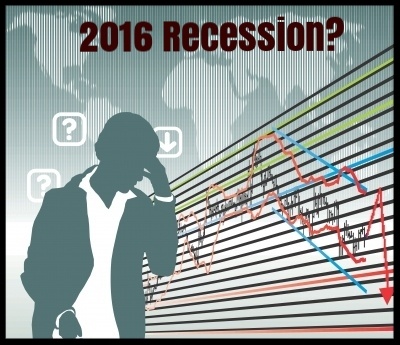 Are you financially secure? What do you think the odds are that things will be worse in the near future? Is the country about to repeat 2008?

Those are the questions on the minds of many Americans who are afraid the economy is poised to enter a recession.

A recession is defined as "a significant decline in economic activity spread across the economy, lasting more than a few months, normally visible in real GDP, real income, employment, industrial production, and wholesale retail sales."

According to a recent Business Insider article, economists and stock analysts have had to address worry about a recession a lot this year. People are feeling insecure, and parts of the economy have been slowing down.

So are we in a recession, or about to be in one?

Financial services company Credit Suisse said in a recent memo "In our view, the US is not in a recession now, and won't be later this year either."

All the data shows that we are not in or imminently headed toward a recession. Here are some of the reasons Credit Suisse gives in their memo for coming to that conclusion:

The economic slowdown has been concentrated in seven states whose economy is heavily involved in mining and drilling. In a recession, all states experience weakness, not just seven. While cheap gasoline is great for you as a driver, it's terrible for people in the oil and gas industry. It's caused around 250,000 people to lose their jobs, and foreclosure rates to rise in states like Texas and North Dakota. A plentiful supply of fossil fuels from domestic and foreign producers and a reduced demand from China and Europe are behind the lower prices.

The Chicago Fed's National Activity Index takes into account a set of economic indicators to see if their trend is weak or strong. A level of -0.7 or lower is indicative of a recession. The most recent measurement was -0.44, which is lower than everyone would like, but still well above recession levels.

Manufacturing Production Is Not Contracting

Economists divide US industrial production into 23 subcomponents. In the last 12 months, eight of them have contracted. In a recession, almost all of the subcomponents should be getting worse.

If It's Not a Recession, What Is It?

Other indicators, like unemployment rates, also show that the economy is not in a recession. But looking at these data shows that we're also not in a period of rapid growth. The country may not be in a recession, but it feels like it for some. Many individuals and families are experiencing their own personal economic crisis. Why is that?

We're still not over the Great Recession. You don't call it a recession with a capital 'R' or 'Great' unless it was very serious. It was the worst since the Great depression. The US technically left recession in June of 2009, and a lot of things have gotten better. Unemployment came down, the stock market went higher, and most things seemed to return to normal.

But try telling a family that lost their home to foreclosure, their jobs to a layoff, and their hope for the future that things are all better. Seven million homeowners have experienced foreclosure since the recession, households lost $16 trillion dollars wealth (about half has been regained), and many workers who lost their jobs now have to get by with lower paying ones.

Low wages make many Americans feel like they are still living in a recession. This is a problem that extends beyond the Great Recession. Adjusted for inflation, wages for most Americans have been flat for decades. Despite gains in productivity and profitability, workers are getting paid about the same but with less benefits, making it harder to make ends meet.

Most people's biggest asset, their home, lost value in the recession. Much of it has come back, but it's still a big issue. Roughly 40% of homeowners either have no equity in their home or very low equity, which makes them vulnerable to foreclosure when they experience a hardship.

Given all this, it's no wonder people are paranoid about another recession. There's a lot to be desired in this economy. Growth could be more robust, wages could be higher, and people and businesses could have more confidence about their future.

But remember to look on the bright side. We are not in a recession by any meaning of the word. Things could always be worse. Not that long ago they were. You can't change the national or world economies. You can only control your own.

If you're among the one million homeowners currently in foreclosure, consider taking advantage of a loan modification program that can help you avoid foreclosure. The government's Home Affordable Modification Program, or HAMP, and similar private programs at the banks, can help you keep your home and save money every month on your mortgage payment. HAMP expires at the end of 2016, so don't hesitate.

It never hurts to put yourself in the best financial position so you're prepared for whatever the economy does next, whether it's another recession or massive growth cycle.

Image courtesy of Vlado at FreeDigitalPhotos.net