Real (Estate) Vampires and Zombies Are In Your Neighborhood 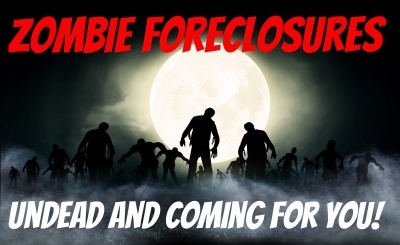 Believe it or not, monsters like vampires and zombies do exist. They're not under your bed, but they might be in your neighborhood right now. Fortunately, they're not the kind that want to drink your blood or eat your brains, but you should still be aware of their existence.

'Vampires' lurk in the 'shadows'

Vampire foreclosure, a term coined by RealtyTrac, describes a situation where a bank forecloses on a home, but the previous homeowner continues living in the house. For whatever reason, the bank has not yet evicted the person or persons living in the home, or sold the property to a new buyer. 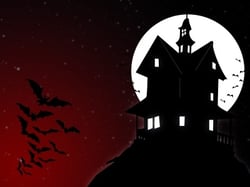 The upside of a vampire foreclosure is that the property shows no outward signs that it has been foreclosed. There could be a vampire next to you right now, and you wouldn't know it. While still living in the home, the previous owner will continue paying utilities, mowing the lawn, and their presence will deter vandals from damaging the property. We would all prefer to live next to a vampire property instead of one that's bank owned with the homeowner evicted.

The downside of a vampire foreclosure is that the bank-owned property cannot be sold when someone's living there, so the home is stuck in limbo. This can reduce the supply of houses on the market and drive prices up. Just as blood-drinking vampires cannot be in the sun, real estate vampires also exist in the dark. Vampire foreclosures are said to be part of the 'shadow inventory' because they aren't on the market.

'Zombies' you thought were dead aren't

A zombie foreclosure is when a homeowner is notified that their property is going to be foreclosed, so they 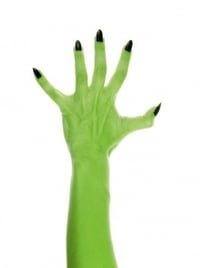 move out, but the foreclosure does not go through. Until the property is sold, the homeowner continues to be responsible for property taxes, association fees, and other expenses, and they're not even living there! Zombie victims assumed the bank was taking the property because that's what they were told, but something happens to delay or stop the foreclosure process. The bank may have lost the paperwork associated with the property, or have problems with title registration because of their own mistakes, or even fraud. If the property has been damaged by the elements or vandals, the bank may drag its feet on foreclosing to avoid paying to repair the property.

A zombie property in your neighborhood is likely to be much worse than a vampire because there are no occupants in the foreclosed property to keep the lights on. These homes may indeed look like the real estate equivalent of a zombie: ugly and unkempt, damaged, and groaning about 'braaaains'. Ok, the part about the brains isn't true, but the rest is.

Zombie foreclosures can be more severe in judicial foreclosure states since the process goes through the courts and takes longer to sort out. Foreclosure is tough enough as is, and has serious consequences, but adding more unexpected expenses puts the former homeowner in an even worse position.

Why haven't these monsters been killed yet?

Something about all these vampires and zombies doesn't make sense. Why are the banks avoiding selling a home they own in the case of vampires, and stalling the foreclosure process in the case of zombies? There's money to be made selling these properties, but the banks are looking at the housing market at a macro, not micro level. In 2013, there were roughly 400,000 zombie and vampire foreclosures, which was more than half of bank-owned properties. If all those homes came out of the shadows and onto the market, it would increase supply and drive prices down. And if the bank were to evict the former owners of a vampire foreclosure, they would have to pay to maintain the vacant property.

The fact that the bank may take a long time to complete the foreclosure process or evict the previous owners once it has can work to the advantage of the (former) homeowner. The negligence or stall tactics of the bank can give the homeowner months or years to stay in the home without making payments.

If you are behind on your mortgage payments, you can avoid unexpected consequences by knowing your options and responsibilities. As in the case of zombie foreclosure, what you don't know can hurt you. An experienced foreclosure defense lawyer can help you find the best solution to your mortgage loan issues. Remember that just because the foreclosure process has started, does not necessarily mean it will ever be completed. You can fight to keep your home even after a sale date has been set, and you may be able to get a loan modification that allows you to keep the property. Consulting with an attorney who's well-versed in foreclosure defense gives you the best chance to achieve the outcome you're seeking.