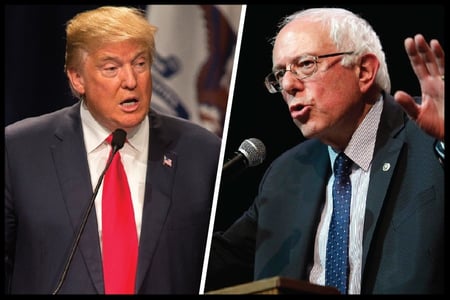 Panelists in the survey were definitely not “feeling the Bern” either. Bernie Sanders was the most likely of the candidates to cause negative expectations. 59 percent of those with an opinion said a Sanders presidency would negatively influence their home value forecast.

Estimates for the Overall Economy and Housing Finance Reform

The panelists for the survey were also asked what they thought the election of different presidential candidates would mean for the economy as a whole and for housing finance reform. Again they had a negative expectation when considering a Trump or Sanders presidency.

So, why did Trump get the reactions he did? Zillow says their experts “largely pointed to his inconsistency on policy, unpredictability as a candidate and lack of political experience.” Some of those things are seen as positives by his supporters, but uncertainty is the enemy of the forecaster.

On the overall economy and housing finance reform, Bernie Sanders was again rated even worse than Trump. 65 percent said their outlook on housing reform would be negative if Sanders wins, and 76 percent said their overall economic outlook would be negatively impacted if the Vermont Senator were to win the presidency. Panelists are worried that a Sanders administration would increase taxes and intervene in markets.

Clinton and Kasich Seen as Safer Choices by Panelists

You might wonder if the panelists in this survey are giving positive or negative estimates based on their own political affiliations, but that doesn't seem to be the case. Republican and Democratic candidates got positive and negative reviews. Bernie Sanders, Donald Trump, and Ted Cruz all got negative ratings across the board. John Kasich and Hillary Clinton were the only candidates to get positive ratings.

Republican John Kasich was the only candidate to get positive marks across the board. The Ohio Governor, who has since dropped out of the race, was viewed positively for his experience as House Budget Committee Chairman under President Bill Clinton. Very few of those who had an opinion felt his election would have a negative impact on home value growth, the overall economy, or housing finance reform.

What does this survey tell you? The American voters may be in the mood for radical ideas in the 2016 election, but industry prefers predictability, moderation, and known policies. Hence the popularity of insurgent candidates Sanders and Trump with many voters, but the preference for candidates with more experience and known policies like Kasich and Clinton with the panelists in this survey.

It's tough to predict what's going to happen with the economy or housing prices, and presidents have less influence over the economy than is often thought. The experts in the Zillow survey gave their best estimates based on the information that's available and their opinions about what the best policies would be.

The panelists in this survey expect housing prices to rise by 4 percent in 2016, compared to last year, and about 3 percent each year through 2020. They think low inventory, low mortgage interest rates, and strong wage and job growth have been and will continue to drive prices higher.

If your home is worth less than what you owe on your mortgage and/or you're having trouble making your mortgage payment, don't count on the next president or rising home values to fix your situation. You may currently be eligible for a loan modification that can allow you to reinstate your loan with a lower payment and possibly even reduce the principal you owe.

The federal government's loan modification program, HAMP, is expiring at the end of 2016, before the next president is sworn in. If you need help, look into it before it's too late.