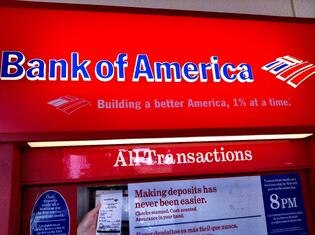 Many of Bank of America's problems can be sourced back to their decision to purchase the troubled Countrywide Financial for $2.5 billion in 2008. Hailed as the worst banking deal in history, Bank of America suffered substantial losses due to faulty mortgage-backed securities totaling over $60 billion. These faulty securities played an integral role in deepening the financial crisis at the time and furthering the 2008 housing market collapse.

After the crisis in 2008, BOA accepted $25 billion in "bailout" money from the government to modify mortgages for homeowners.While it was supposed to be encouraging the Bank of America loan modification process, BOA actually encouraged foreclosures. BOA managers and loan officers were given incentives to push homeowners to foreclosure because the bank profits on the process through the fees. These shady practices went so far to actually spell out foreclosure quotas in monthly meetings.

As the largest mortgage servicer in the HAMP program, Bank America had twice as many eligible loans as the next largest bank. Instead of issuing a Bank of America loan modification, BOA would deny applications for no apparent reason. Even more alarming, these incidents of denying qualified applicants was done en masse through a process called a "blitz." One blitz was to simply deny all files with documentation 60 or more days old, which would happen once or twice a month. According to the sworn testimony of a previous BOA manager and underwriter, William Wilson Jr., "During a blitz, a single team would decline between 600 and 1,500 modification files at a time."

As a direct violation to the Fair Housing Act, a federal lawsuit was filed against Bank of America for discrimination against homeowners who are pregnant. They allegedly decided against issuing Bank of America loan modifications or refinances to pregnant women due to the perceived risk of default. This practice is in direct conflict of the Fair Housing Act, which prohibits discrimination based on familial status or gender.

Another common BoA loan modification problem is harassment. Recently, Bank of America agreed to pay $32 million to settle charges over allegations of making harassing calls. The settlement resolved a class action lawsuit filed on the behalf 7.7 million of BOA's customers. While there are legal ways to collect a debt; under the 1991 Telephone Consumer Protection Act, it's illegal for making auto-dialed called without the customer's consent to mobile phones.

Amerihope Alliance Legal Services has successfully completed more than 5,000 loan restructures and stopped foreclosures. Amerihope is one of the leading law firms focusing in helping homeowners save their home from foreclosure and work toward a successful loan modification.