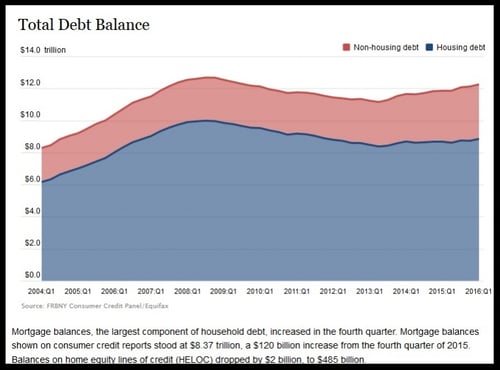 The amount of debt American households owe on their mortgages increased in the first quarter of 2016 to its highest level in four and a half years, according to the Federal Reserve Bank of New York's Quarterly report on Household Debt and Credit.

The quarterly report is “based on data from the New York Fed’s Consumer Credit Panel, a nationally representative sample of individual- and household-level debt and credit records drawn from anonymized Equifax credit data,” their press release says.

The nationwide total of mortgage debt was $8.37 trillion dollars in the first quarter of 2016, which is a $120 billion increase from the previous quarter. 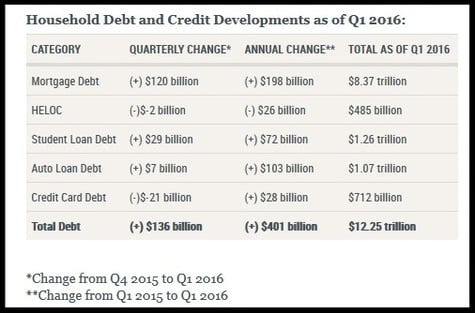 Home equity line of credit (HELOC) debt dropped by $2 billion from the fourth quarter of 2015 to the first quarter 2016. Total housing debt, which includes mortgage and HELOC debt, rose to $8.85 trillion in the first three months of the year.

Although mortgage debt increased in the first three months of 2016, the percentage of people behind on their mortgages fell slightly, with 2.1 percent of mortgages 90 days delinquent in the first quarter of 2016 compared to 2.2 percent the quarter before.

The average credit score for borrowers originating a mortgage increased, with 58 percent of new mortgage debt being taken out by people with a credit score greater than 760.

Five percent of total debt was in some stage of delinquency in the first quarter, which is the lowest level since the second quarter of 2007.

"Delinquency rates and the overall quality of outstanding debt continue to improve. The proportion of overall debt that becomes newly delinquent has been on a steady downward trend and is at its lowest level since our series began in 1999. This improvement is in large part driven by mortgages,"

97,000 people had a new foreclosure added to their credit report in the first quarter of 2016. That may seem like a lot, but it's actually close to the lowest level reported in 17 years and a continuation of a positive trend.

What If You're Struggling With Your Mortgage Debt?

Any positives in the economy as a whole mean nothing to you if your own debt is unmanageable. You might say, “So some national trends are good, how nice for the nation. What help is it to me?”

Good point. If you're in foreclosure yourself it doesn't matter what everyone else is going through. Keep in mind, though, that there is a way to reduce your mortgage debt and keep your home.

You may be eligible for a loan modification that reinstates your mortgage with a permanently reduced payment. It's also possible to reduce your principal when modifying your loan. Even a small principal reduction can help reduce your negative equity and save you money.

A loan modification is the only hope many distressed homeowners have for avoiding foreclosure. Banks, however, do not give them out without making you work for it. Take a look at our posts about the qualifications for HAMP modifications and tips on finding a reputable attorney who can both defend you from foreclosure and assist you in getting a loan modification.