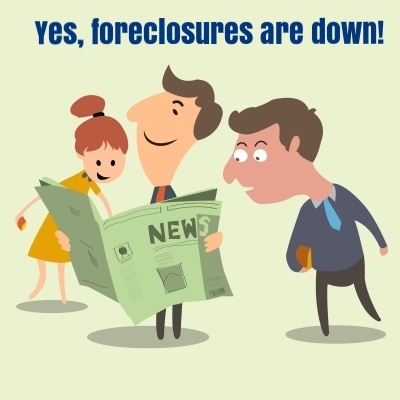 Fortunately, after peaking around 2010, the delinquency and foreclosure rates have been declining, and home values have been rising. In 2016 the data on housing has continued to be good.

According to a report from the Federal Reserve Bank of New York:

“About 83,000 individuals had a new foreclosure notation added to their credit reports between April 1 and June 30, a new low in the 18-year history of the data.”

We now have the lowest number of new foreclosures since 1998.

The delinquency and foreclosure rate for U.S. mortgages is now about at its historic average. Delinquency describes homeowners who are behind on their mortgage but not in foreclosure.

So, why the improvement? A recent article from Business Insider gives four reasons:

So, does that mean the housing crisis is over? Some say yes, but keep in mind that the foreclosure rates are the national average, and the housing recovery has been uneven. Some states and regions have very serious problems.

The number of foreclosures isn't the only thing to be taken into consideration. Although home prices have been rising, there were still about 6.7 million homeowners who were seriously underwater in the second quarter of 2016, according to data from RealtyTrac. That represents about 12 percent of mortgaged properties in the country, which is a reduction from the previous quarter and the same quarter in 2015.

If you think a loan mod could help you, consider working with an experienced professional. Our firm has helped homeowners who haven't paid their mortgages in nearly a decade secure a loan modification that reinstates their mortgage with a lower monthly payment.

Image courtesy of jesadaphorn at FreeDigitalPhotos.net. Graph from Capital Economics.