If you're having problems with your mortgage, it's a good idea to communicate with your bank to see if you can work with them for some sort of agreement to stay out of foreclosure.

Loan modifications are the only option many homeowners have to keep their home. The terms of the loan, such as the length of the loan, the interest rate, and the principal balance can be changed.

Loan modifications are a life saver for those who get them. Unfortunately, many Wells Fargo borrowers end up disappointed when they don't get the results they're looking for after trying to deal with the bank on their own. And Wells Fargo has a reputation as one of the most difficult banks to work with for a loan modification. 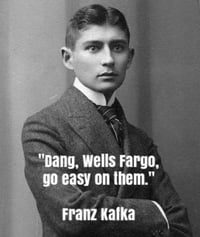 To be clear, calling something Kafkaesque is not a complement. It's a reference to the writings of Franz Kafka whose work featured characters dealing with “incomprehensible social-bureaucratic powers.”

Schneiderman described “a pattern of obstructive practices designed to avoid reasonable modifications to loan terms by burying homeowners in paperwork and besieging them with bureaucratic delays and dead ends."

That lawsuit was settled and Wells Fargo has made improvements to their process, but there are still many complaints we hear from homeowners trying to get a loan modification.

When you don't have experience with loan modifications, you don't know if you're putting all of your time, energy, and hope into something that's never going to work. It may be that it's not possible to modify your loan with the income you have, and that you should be putting your energy into showing more income, or trying for something like a short sale or deed in lieu of foreclosure.

A knowledgeable professional can advise you on whether or not it's likely that you'll be able to keep your home. And a good attorney can defend you from foreclosure, often for years, no matter what your intention is. Some of our Wells Fargo case results are available here.

Wells Fargo, and the other banks as well, can be difficult to deal with. Don't try to go toe to toe with them on your own. It won't be a fair fight. Get a qualified professional on your side to ensure that you stack the odds of getting what you want in your favor.