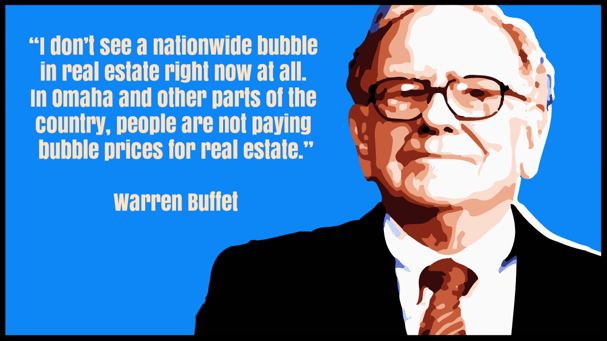 Warren Buffet is the most successful investor in the world and one of the richest people alive. As the chairman and CEO of Berkshire Hathaway, a holding company with more than half a trillion dollars in assets, people listen when he talks.

People get a chance to hear the “Oracle of Omaha,” speak every year at Berkshire Hathaway's annual shareholder meeting in Nebraska. Due to their fame, incredible record of success, and diverse portfolio of companies, the meeting draws over 20,000 people from around the world and has been described as the Woodstock of capitalism.

2016's meeting was held the last weekend in April, and according to Fortune, Buffet was asked about something that many of us are concerned about: Is real estate a bubble about to burst?

“I don’t see a nationwide bubble in real estate right now at all. In Omaha and other parts of the country, people are not paying bubble prices for real estate.” Buffet said.

Regarding the likelihood of another crisis like the one the country experienced in 2008, he said, “I don’t think we will have a repeat of that.”

Buffet did concede that, while now is a good time to buy a house, it's not as good a time as four years ago. That's stating the obvious. Home prices bottomed out around late 2012 and have been going up ever since. Right at the bottom would have been the absolute best time to buy, but it's only in hindsight that you could know where the bottom was.

Housing prices are now nearly what they were at their peak in 2007 and that has some investors thinking that real estate prices are about to take a huge hit leading us into another foreclosure crisis.

There are pockets of weakness. States like New Jersey and Florida and some cities are experiencing foreclosure in numbers that are much worse than the national average.

However there are some significant differences now compared to the lead up to the credit crisis. Home buyers today aren't using as much leverage, lending standards are tighter, and more homes are being purchased by owner occupiers rather than speculators. It looks a lot different than a bubble. But many people are still scared about the housing market and economy.

Why Is There So Much Fear?

The Great Recession may be technically over, and there have been a lot of improvements, but many Americans just aren't feeling it. Millions are underemployed, underwater on their home loan, and pessimistic about their future prospects. Suicide is at a 30-year high, wages have been flat for 15 years while the price of living has gone up, and six million homeowners have lost their homes to foreclosure.

Buffet has sympathy for the people who are angry about losing their homes to foreclosure, who feel like the responsible parties haven't been held accountable, and that they can't get ahead:

“Nothing is more sacred than people’s homes. And millions and millions of people… had their visions of their homes shattered. And then they saw no one go to jail, and they saw Wall Street continue and rich people continue to get richer...They look at the prosperity around them, and they say, ‘Why can’t I—as a decent citizen doing my part for my community and my kids—why can’t I rise a bit too?'” 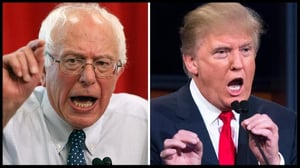 People have endured a lot and feel like everyone has betrayed them, including the government, private companies, and their own neighbors. They're paranoid and don't trust anyone or anything.

All the uncertainty and fear has made conditions right for “insurgent” candidates Donald Trump and Bernie Sanders to resonate with so many people. They're giving a voice to people who feel like they've been left behind. When you believe the entire system is rigged and things couldn't get any worse, an unconventional candidate outside the normal establishment is more appealing.

If you're looking for things to feel hopeless about, you'll find plenty. There are also reasons to be optimistic. If you're trying to avoid foreclosure, there are government and bank programs that you may be eligible for that could reduce the debt burden you have with your mortgage through a principal reducing loan modification. Even without a principal reduction, a loan modification could lower your monthly payment, eliminate the threat of foreclosure, and return your loan to normal servicing.

Even if you can't afford to keep your home there are alternatives to foreclosure that can allow you exit your home under the best circumstances. Some options, like a HAFA short sale or cash for keys agreement, can even put money in your pocket.

So stop worrying about the national, macro economy, which you have no control over, and do what's best for you and your family's economy.

Regarding the future, Buffet, ever the optimist, doesn't buy into all the talk of doom and gloom about America's future, saying “For 240 years it’s been a terrible mistake to bet against America, and now is no time to start. America’s golden goose of commerce and innovation will continue to lay more and larger eggs.”