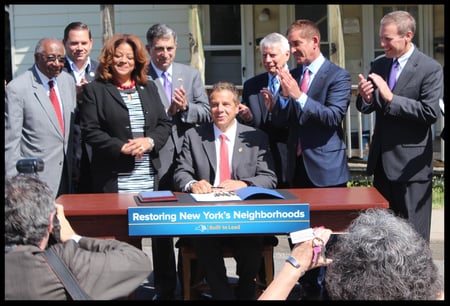 Your bank is going to have a qualified attorney at the conference advocating for their interests, and so should you. It's not the appropriate time or place to pretend like you're an attorney. Remember the saying "He who represents himself has a fool for a client."

You need someone to keep the bank honest and aggressively assert your rights. We've represented clients at settlement conferences in New York where the bank's attorney made claims that they couldn't prove. We demanded that they back up what they said, and that the homeowner be allowed to stay out of foreclosure until that happens or another solution is reached.

The only foreclosure alternative for most homeowners that allows them to keep their home is a loan modification. Unfortunately they can be quite difficult to get and most people who apply on their own are denied. The knowledge and experience of a qualified attorney can increase your odds of success with your loan modification.

The other component of the new legislation is to fight zombie homes, which are properties left vacant after foreclosure. New York has the second worst rate of zombie foreclosures in the country, and it's not good for property values or the communities that have these vacant homes.

“For each zombie home that we cure and for each that we prevent with this legislation, we are saving entire neighborhoods from the corrosive effect of blight and neglect,"

Details of the new efforts to fight zombies are below.

Time will tell if the new legislation in New York actually helps prevent foreclosures and vacant homes. But none of these new measures make having a qualified attorney on your side any less necessary. The foreclosure process is still complex and the services of an experienced foreclosure defense attorney are invaluable for getting the outcome you want.

Here are details from the governor's website on how the legislation will:

Combat The Blight Created By Vacant And Abandoned Properties

Governor Cuomo also announced the creation of a new hotline that New Yorkers can call to report vacant and abandoned properties across the state. The number for the hotline is 800-342-3736.