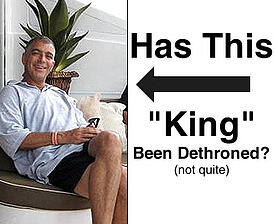 That is what David Stern and his firm did to the justice system of Florida, which was arguably the state hit hardest by the foreclosure crisis. Fannie Mae, Freddie Mac, and several other large mortgage lenders trusted his firm with their foreclosure cases, because he was able to push them quickly through Florida's slow judicial foreclosure system. Little did they know that Stern was bribing his employees with houses, cars, and jewelry for forging documents and falsifying information within cases (this practice became popularly known as "robo-signing"). Even with thousands of employees, his firm's employees usually disregarded due process of foreclosure law because they had way too many cases to handle.

As a matter of fact, to say that the attorneys at Stern's firm were over their heads would be the understatement of the century. The Florida Bar's recent report on Stern says that attorneys in Stern's firm were asked to handle an average of 1,646 individual foreclosure cases PER PERSON in 2008. Couple this with the fact that most of the Sterns' attorneys were young and inexperienced recent law school graduates, and you have a recipe for disaster. Even though his firm was overwhelmed since the start of the foreclosure crisis, Stern continued to take on more cases, because as the Bar report states, his intention was on increasing profit, which was contingent on the number of foreclosures he completed. Stern was able to charge mortgage lenders a premium because he seemingly was the fastest in the business, and it certainly added up: Stern himself admitted to one employee that he made over $58 million in 2010 alone.

The House of Cards Collapses 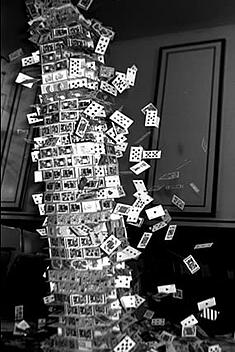 Eventually, Stern's actions came to light, and the court system put a halt on all Stern-related cases until they were reviewed properly. When Stern's house of cards came crashing down, he returned the deck to the judicial system. On March 4, 2011, Stern wrote to judges that his firm intended to "take no further action" on over 100,000 pending foreclosure cases because he didn't have enough employees or money to do so in the "right" way. This obviously was a lie, because his firm had been raking in tens of millions of dollars for several years running. As you would imagine, Stern's announcement wreaked havoc on Florida's already strained court system and created a backlog of foreclosures, which still lingers today. Any foreclosure suit that was even associated with Stern's firm (which was rapidly closed down) has to undergo extensive review, because they're all considered tainted.

So what happened to Stern? Unlike the swindlers at companies like Enron or scam artists like Bernie Madoff, he did not receive hundreds of years in jail and was not asked by the government to pay millions in fines. The disbarment (meaning that he'll lose his law license) is the first real legal action that anyone has taken against Stern himself- but there's no doubt that he'll mind it much, considering that he is already a millionaire tens of times over. But kudos on the Florida bar for leading the way for others to take Stern to court. It's only the right thing to do for thousands of homeowners whose lives he swindled away.

Who Should Take the Blame?

There are many places where fingers can be pointed in Stern's case. The banks are at fault for "putting all their eggs in one basket", so to speak, and not doing their due diligence in putting checks and balances in place to ensure that Stern was going through the due process of law. Florida's court system is at fault for turning a blind eye to Stern's activities for so long, which they did because Stern was seemingly making an antiquated, inefficient court system work well. Stern is, of course, at fault for crossing every ethical boundary that could be crossed by any member of the legal profession.

Regardless of where you choose to place the blame, one thing is for sure- if your home was one that was placed under  foreclosure moratorium after the "robo-signing" scandal came to light across the United States, your window is closing; new laws in every "hardest hit" state have made it possible for banks and their lawyers to legally expedite the foreclosure process. It's important that you hire a foreclosure defense attorney to help put an end to your foreclosure issues and help set your financial future back on track.