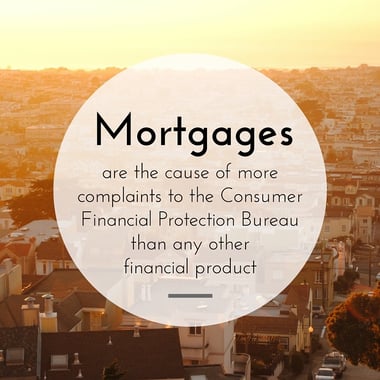 Mortgage loans are the cause of more complaints than any other financial product to the Consumer Financial Protection Bureau (CFPB), according to its Monthly Complaint Report for September 2015.

The CFPB has registered 192,500 mortgage complaints, which account for 27% of the total of 702,900 complaints it has received. More than half of all mortgage complaints are related to issues borrowers encounter when they are unable to pay, including problems with foreclosure and loan modification applications.

The second most common reason for making a mortgage complaint related to problems making payments. Among other things, consumers complained that their payment was not accepted when it was for an amount less than they owed. Homeowners also said things got more complicated when their loans were transferred, with some feeling that they would not have lost their home were it not for the loan being transferred.

The CFPB's Monthly Complaint Report also includes mortgage complaints by state. It uses a three month average to compare the change in the volume of complaints for the months of June through August 2015 to the same period in 2014. That comparison shows that Nebraska experienced the largest increase in complaints at 50%, while Pennsylvania was up 28%, New Jersey: 20%, New York: 15%, Illinois: 14%. Florida's year over year complaint volume fell by -2%, while West Virginia experienced the biggest drop at -54%.

The Bureau uses year-over-year comparison for the months of April-June to measure mortgage complaints by company, and finds that Carrington Mortgage had the largest percentage increase in complaints with 117%. PennyMac Loan Services and Seterus were next with increases of 85 and 60%, respectively. HSBC had the greatest decrease with -28%.

Companies with the greatest rate of untimely responses to mortgage complaints were Ocwen with 3%, and Carrington Mortgage and Bayview Loan Servicing, LLC with 2% each. Nationstar Mortgage had the highest number of timely responses with 1,059.

The CFPB has taken action to make it easier for mortgage shoppers to understand their prospective loans. Beginning October 3, the CFPB's Know Before You Owe mortgage disclosure rule requires that prospective borrowers be given a Loan Estimate when shopping for a mortgage, and a Closing Disclosure at closing. The Closing Disclosure must be given to the borrower three business days before closing. The two documents replace four that were previously required. The CFPB has a number of resources, including sample Loan Estimate and Closing Disclosure forms, at its website.

Complaints reported for every financial product

Although mortgages are the all-time complaint leader to the CFPB, consumer loans showed the greatest increase for the period of June-August 2014 compared to June-August 2015, with a 47% rise. Consumer loans include everything from vehicle to pawn shop loans and more.

Credit reporting and money transfer products have the second and third highest increase with 39 and 36% respectively.

By average monthly volume, credit reporting companies Equifax and Experian were the most complained about, with Bank of America, Wells Fargo, and Transunion following. It's clear that the credit reporting companies are the cause of much consumer anger. It's no wonder considering the accounts of consumers with good credit who've had their credit report mixed up with someone else with a similar name and bad credit. It can take years to correct credit histories, which is a very serious problem considering how important a credit report can be for getting a job or loan.

The CFPB was created in 2010 in response to the financial crisis and recession, and is is responsible for consumer protection relating to mortgages, credit cards, student loans, and other areas of the financial sector. The CFPB's Monthly Complaint Report shows that the agency is holding companies accountable by making complaints about them available to the public, and working to fix issues and prevent them in the future. You can visit consumerfinance.gov/complaint to submit a complaint of your own.

As a consumer of financial products, you can make the best choices when you are the most informed. Educating yourself by reading all relevant information allows you to know your responsibilities and those of the company you interact with. Honest mistakes, negligence, and illegal activity have more serious consequences when they occur in financial products than non-financial products. There is no shortage of stories that tell of the suffering consumers endure when a financial company does something wrong.

As the CFPB's report shows, the mortgage industry is an area of the financial sector that has generated far more than its share of complaints. Everything from bad lending practices to fraudulent foreclosure and everything in between has been documented in the housing industry. If you are worried about foreclosure for any reason, a qualified attorney can help you assert your rights and fight for the best outcome.