Can Cash For Keys Work For Me? 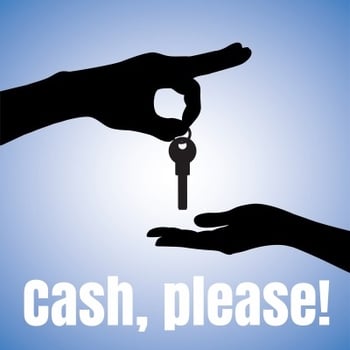 If you're in foreclosure and have decided that you cannot or do not want to keep your home, you may be wondering if you could get a “cash for keys” agreement. Cash for keys, sometimes called a "move out incentive", may sound like something you've heard about in hip hop music, but in this case it has nothing to do with kilos of illegal drugs. It's an agreement between you and your lender to hand over the keys to, and move out of your property in exchange for money. Getting paid cash money is always a seductive option, but you should take a close look at what you give up in exchange for that money before signing an agreement.

You should understand from the outset that cash for keys is not a government program. It's just something that your lender may agree to under certain circumstances. If your lender has a cash for keys program, it's probably not something they'll bring to your attention. You will have to take the initiative to ask about it on your own and, if they do have a program, determine if you are eligible.

What's in it for the lender?

So, it's clear what the homeowner has to gain in a cash for keys agreement: cash. But, why would a lender be willing to pay a homeowner to fork over the keys when they intend on taking the property through foreclosure anyway? After all, they're legally entitled to take the property, and could very well lose money in the foreclosure process. Why would they spend even more money? There are two reasons:

What to look for in a cash for keys agreement

You should make sure that any agreement you sign states that you will not be responsible for a deficiency judgment. Without this, the lender could still come after you to make them whole on the loan. You don't want continued financial obligations to your home after you leave.

Look at all the options

A cash for keys agreement can seem like the best option for the homeowner, because with it, they receive badly-needed cash that they can use to pay first and last month of rent and a security deposit on an apartment or other rental. But, just because you get cash does not necessarily mean that the offer is the best choice for you. It could be an offer that's best for the bank. Look at the details and decide what to do based on the unique details of your situation. Make sure you have considered a short sale, loan modification, and deed in lieu of foreclosure. (Cash for keys can be included a deed in lieu of foreclosure agreement, along with a deficiency waiver.)

The actions you take to deal with your foreclosure situation have ramifications that last for years. Your credit will be negatively affected, and you and your family will have to move. If you are behind on your mortgage payment and are considering a cash for keys agreement, or any other resolution, it would be in your best interest to consult with a qualified attorney. Your lender may make you an offer that seems like the best choice, but unless you have experience negotiating in the areas of the law that deal with foreclosure, you'll never know if you got the best deal possible. What you don't know can hurt you. It's best to work with a professional for the best possible solution.