1. Bank of America still foreclosing on the wrong house

Unfortunately, now that the foreclosure crisis has been in full-swing for several years, we begin to think that the Big Banksters know to to handle a foreclosure lawsuit. In all judicial foreclosure states there is an exact structure entailing how and when a foreclosure lawsuit can be brought against any defendant, and still banks are taking homes from the wrong people.

Throughout the foreclosure crisis, more than 700 military families were wrongfully foreclosed.

2. Bank of America makes up their own regulations.

3. Bank of America paid their employees bonuses to foreclose on homeowners!

You may have already read this story, you may not have -- either way, it's sickening. Bank of America accepted government money to help homeowners and from the get-go, set out to undermine the Making Home Affordable Program. Former employees have come out, in sworn affidavits, about the unscrupulous practices on the inside.

"Bank of America routinely denied qualified borrowers a chance to modify their loans to more affordable terms and paid cash bonuses to bank staffers for pushing homeowners into foreclosure." 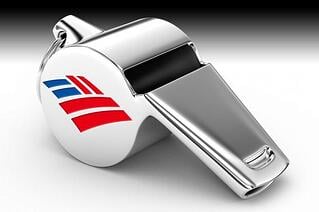 Perhaps most frustrating is that news media, Bank of America, and the U.S. Government have been saying all along, "Call your lender, they will help you." Now it's more clear than ever that homeowners have been strung along and deceived.

4. 2,215 (and counting!) Bank of America complaints on ConsumerAffairs.com

Stores of "the investors denied my modification,"  "these harassing phone calls continue," "send more paperwork," and "they have done nothing but give us the runaround," are all over the pages and pages of Bank of America complaints they have listed.

In this story out of San Francisco, after acknowledging receipt of one homeowner's $27,777.85 cashier's check, bank representatives "lost" the check and proceeded to foreclose and take the family's home.

"I was forced into this," he said as he cleared the furniture from his home. "I had no other choice."

Although Bank of America has implemented new programs, including the the Hope Loan Portal for loan modification requests, they are still causing undue hardship to many Americans. We are proud to say we have defended many homeowners against Bank of America, and continue to do so with positive results.