It's hard to believe, but 2013 is already coming to a close. This has been quite an eventful year for New Jersey homeowners- especially because the events of 2012 have started a ripple -- or better yet, a wave of effects that lasted into 2013. For example:

(Read more about this in our article: More New Jersey Foreclosure Filings than Ever! Wonder Why?) 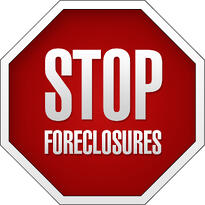 The End, the Extension, and the End (Again) of the Sandy Foreclosure Moratorium

Foreclosures tend to spike in disaster areas after disasters have hit, as many homeowners prefer to start their life elsewhere instead of paying for major home repairs. That's why the federal government ordered a 90-day moratorium on foreclosures and certain evictions in affected areas after Hurricane Sandy hit in 2012. That moratorium was supposed to expire at the end of January 2013, but was ordered extended an additional 90 days through April 30, 2013. As mentioned before, this was good for troubled homeowners, but only added to New Jersey's immense backlog of foreclosures.

There were other special programs put into place for homeowners in New Jersey, such as special forbearance, modification, and fee waiver programs. Just as with the foreclosure moratorium, these programs were intended to help people return to normalcy after the storm hit. These programs have since expired, too.

Vampire and zombie houses are a hot topic in housing circles nationwide. "Zombies" are homes that are still within the foreclosure process that were vacated by their original homeowners. "Vampires" are homes that were foreclosed on that are still being lived in by the foreclosed homeowners.  It's estimated that there are over 2,000 "vampire" homes in New Jersey, and roughly 14,000 "zombies" in New Jersey too.

The problem with zombie homes is that they cause blight on the neighborhood around them. An unoccupied home means no one is there to maintain the house and the property it sits on, and "zombies" can become hotspots of crime in urban areas. Cities in other states (such as Chicago) have actually enacted legislation to stem the blight that results from zombie foreclosures.

(Learn More About This in Our Article: Scary Vampires and Zombies in Your Neighborhood; No Costumes Needed)

It will be interesting to see what happens in 2014. If anything's for sure, we will be on top of it. Look out for our article about what we expect to happen with New Jersey foreclosures in the New Year.