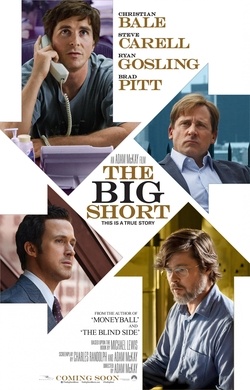 The movie “The Big Short” was released over the holiday season to large audiences and critical acclaim. It tells the true story of some colorful traders and hedge fund managers who believed that the market in mortgage debt was set to collapse and of their quest to profit from it.

It seemed to Burry and the other investors that the market was underestimating the chances that some mortgage-backed securities would fail. So they found a way to bet against them. The banks took the investors bets, believing they would never have to pay them out.

It's no spoiler to say that the investors were right. The market did collapse, the banks failed, and those who saw it coming made a fortune.

You know what happened next. The country entered a terrible recession. Millions lost their jobs, their homes, and value in their investments.

People wondered if civilization as we knew it would end. Would the country turn into a post-apocalyptic wasteland where knowing how to kill and skin a squirrel would be more useful than anything you learned in school? Not quite, but things have been very tough for a lot of people. Six million homes have been lost to foreclosure, and it's not over yet. Another million homes are in some stage of the foreclosure process.

“The Big Short” is about the cause of the housing collapse from the point of view of some Wall Street players, but its aftermath and the effects felt by regular people are briefly addressed. Near the end of the movie, Brad Pitt's character, Ben Rickert, scolds some traders for being so delighted that their bet against the American economy is going to pay off. He tells them that for every 1% unemployment goes up, 40,000 people die. That may or may not be an accurate statistic, but loss of income is a leading cause of foreclosure, and people experiencing foreclosure are at a higher risk for suicide and serious health problems. The games Wall Street plays have life and death consequences.

Who Can We Blame For All Of This?

Steve Carrell's character, Mark Baum, predicts that poor people and immigrants will be blamed for the mess that's been created. And some have indeed placed the blame primarily on low income homeowners who spent too much on a house, were overly optimistic about their future earning potential, and were wrong and defaulted.  But that's not really accurate. Financial author Noah Smith says:

“...the bubble was driven by middle- and high-income borrowers, and the borrowers who drove up prices were primarily speculators rather than owner-occupiers.”

There are stereotypes about what type of people experience foreclosure. They're thought to be lower income, uneducated, and lazy. But that's not true either. Foreclosure can affect anyone, even multi-millionaire celebrities.

An event as complex as the housing market collapse has many causes. Money manager and author Barry Ritholtz lists thirty people, institutions, and legislative decisions to blame in a 2009 article. It includes borrowers, the ratings agencies, mortgage originators and lending banks, investors, brokers, appraisers, the federal government, CDO managers, and on and on. It took a lot of people to make such an epic failure.

There is plenty of blame to go around, and it can't all be placed on any one group. No matter what happened, who's getting the blame, and if it's fair, what really matters is where you are now and what you're going to do.

The government has come out with programs to help homeowners who are in danger of foreclosure. They may not be perfect or go far enough, but they have helped many people to keep their home. One of the more popular programs is the Home Affordable Modification Program (HAMP), which helps distressed homeowners permanently modify their mortgage loan so the monthly payment is lowered to an affordable portion of their income.

If you're behind on your mortgage and want to keep your home, see if you're eligible for a loan modification. You may be able to get a lower interest rate, different term length, and even a principal reduction. Talk to someone who's helped people in your situation for the best chance of getting what you want. Keep in mind that HAMP is set to expire at the end of 2016, so there's a limited amount of time to take advantage of it.

Let us know what you think about "The Big Short", the causes of the housing crisis, and the government's response in the comment section below.