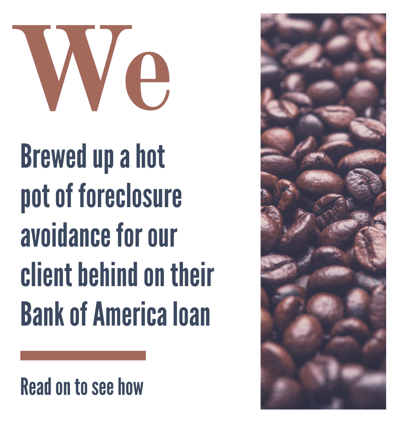 Divorce stinks. And the emotional cost is only part of the reason why. It also affects the finances of the people involved, usually for the worse. Loans that were taken out as a couple become unaffordable after the split when one person is trying to make the payments on their own.

That's the case for a Florida couple that retained our law firm to help them avoid foreclosure. I'll call them Mr. and Mrs. Kelly to protect their privacy. The Kellys divorced in 2009, but remained on good terms after separating.

Their home was awarded to Mrs. Kelly in the divorce. She tried to keep it, but couldn't afford the payments on her own, and Bank of America filed for foreclosure in 2011.

Mrs. Kelly wanted to find a solution to keep the property, but needed to reinstate the mortgage with a lower payment that was affordable with her income. A loan modification is the only way to achieve that.

Mrs. Kelly completed a Request for Mortgage Assistance (RMA), which is the application you have to complete to be eligible for a loan modification. Her servicer, Bank of America, and the investor in her loan, the USDA, denied her application on the grounds that she and Mr. Kelly made too much money.

The problem is that only her income should've been considered since she was awarded the house in the divorce and her ex husband's income was irrelevant.

Filing A Complaint With The Consumer Financial Protection Bureau (CFPB)

We appealed the denial and filed a formal complaint with the Consumer Financial Protection Bureau (CFPB) that called the denial of the loan modification application improper.

When it became clear that a loan modification was unlikely to be approved, Mrs. Kelly decided that it would be best to cut her losses and move on. So she began working with a realtor to sell the home in a short sale instead.

A short sale is preferable to foreclosure because it does less damage to a person's credit, and a waiver of deficiency judgment, which lets the homeowner avoid being sued for the deficient amount, is often part of the agreement.

But Bank of America wanted to foreclose before Mrs. Kelly could sell the home in a short sale. So we kept fighting the bank to give her the time to sell the property.

It looked like a short sale might go through when an offer was made on the home. But the USDA denied it for the same reason the loan modification application was denied: they said she had too much income to deserve it because they considered her ex-husband's income as well as hers.

What an awful situation to be in! She's told that she made too much money to deserve help either keeping the home with a loan modification or selling it in a short sale because they were counting her ex's income when they shouldn't have. It's like they really wanted to foreclose.

So we filed a second CFPB complaint, this time about the denial of the short sale application. These formal complaints were not only completely justified, but they were also part of our strategy to stall the bank and keep them from obtaining judgment and foreclosing on the property.

There was another issue: Bank of America did not have the documents they were supposed to have in order to foreclose. They acknowledged in their original complaint that they didn't have the original promissory note, and they had to amended their complaint multiple times because of that and other issues.

A bank can foreclose on a property without the note, but is required to produce a lost note affidavit showing that they are the proper party to foreclose. Bank of America never did everything they were required to. Their affidavits either weren't sworn under oath or didn't contain the proper language. At every step we pointed out to the court, through motions to strike or answers to complaints, the specific things Bank of America was doing that were wrong. And we demanded that foreclosure not go through because of it.

It got complicated and technical, and we did far more than will fit in one blog post. But the bottom line is that our aggressive tactics to hold the bank accountable for each and every mistake they made, no matter how small, worked. We've kept our client's home from being lost to foreclosure. And Mrs. Kelly was finally approved for a short sale in 2016 after years of not making a payment. The letter approving the short sale states that $48,511 of debt will be forgiven!

Your short sale is approved. We're providing information about the next steps.

This is exactly why it's so important to have an experienced attorney on your side when facing something as consequential as foreclosure. Do you understand Chapter 702.015(4), Florida Statute (2013)? Did you even know it existed? Probably not, and you could have lost your home because of it. Our attorneys and paralegals have seen it all before, and know how to use their knowledge to our client's advantage.

Without an experienced law firm like ours behind her, the bank could have foreclosed our client years earlier. But our work has allowed her to stay in her home without making payment and leave on her own terms under the best circumstances.