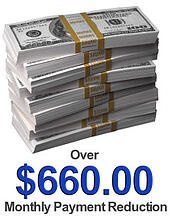 This happened to a homeowner who was faced with a dire situation. He was one of the first people to receive a loan modification from the HAMP program. Shortly after receiving his modification, harder times hit. The homeowner lost his job, and the family was only depending on his wife's salary for support. By the time the homeowner connected with us, he was several months past due on his $1,730 FHA mortgage payment, and had just been served foreclosure.

In September 2013, the homeowner received a full loan modification from Selene. Under the new terms, his payment would drop to $1,070, a $660 drop. His interest rate was also dropped from 6.75% to a more manageable 5.50%. After this modification was cemented, our lawyers had the foreclosure dismissed in court, so that the home was no longer in foreclosure.

Our goal at Amerihope Alliance Legal Services is to provide legal counsel to help homeowners avoid foreclosure and have a more secure financial future. Since 2008, we have helped over 5,000 homeowners save their homes, and we look forward to saving even more homes in the future.