Entertainment is not just something that distracts us from the realities of our mundane lives with science fiction stories involving space, the distant future, aliens, and supernatural forces. Not that there's anything wrong with that, but some entertainment is grounded in the specific realities and challenges people live with and fight against in contemporary society. One such work is a web series called Lien On Me.

Lien On Me is a web series about a Realtor named Johnny Columbus who's having such difficulty selling homes during the housing crisis that his own home is being foreclosed. His wife Theona's suicide hotline service is booming, but their loan broker is relentless in trying to get money from the homeowners. To try to make ends meet, the couple rents a room to their recently-evicted, flaky friends Carly and Charlie. Johnny's real estate boss Laura, whose has also experienced foreclosure, is squatting in the homes he's trying, unsuccessfully, to sell. As the characters push each other out of their comfort zones, experience misfortune, and try to make the best out of difficult circumstances, comedy ensues.

Johnny has a home and bills that used to be affordable, when he was actually making money selling houses. But, the series starts after the housing market's rapid and steep decline, which causes his income to take such a hit that he's unable to pay his own mortgage. Many Americans can relate to Johnny Columbus's situation of finding their career suddenly not so in-demand. Realtors, construction workers, people in fields that support building and real estate, planned to work those careers until retirement. They expected to continue making a good living as long as they worked hard, and didn't know that forces beyond their control would make it so they couldn't earn a living in their field, no matter haw hard they tried. Most people don't know they're living in a bubble until it bursts! 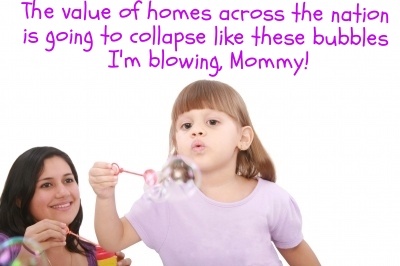 A series that features characters who have to rent a room of their home to try and keep it resonates with people who are in a similar situation, or are just aware that things like that are going on in America. People who are desperate to keep their home are getting second and third jobs, selling valuable possessions, and doing whatever they can to earn extra money.

An irony of the story is that the only business that's doing well is a suicide prevention hotline. Sadly, in the real world, the increase in foreclosures has been linked with higher suicide rates. Though Lien On Me's take on suicide is handled comically (Theona's suicide hotline actually includes advertisements), it is rooted in the real consequences of foreclosure.

A series like Lien On Me wouldn't make sense if it were made at a time when few people were worried about losing their home, but it was made in 2010, during the foreclosure crisis. Five years later, the foreclosure crisis is still going strong and many people continue to be worried about losing their homes. Foreclosures are actually rising in some areas, fraud related to robo-signing has not been sorted out, and many homeowners are feeling uncertainty and anger.

The vulgar language and situations in Lien On Me make it inappropriate for children and the squeamish. But those who believe that humor can help to cope with difficult circumstances will like the way the series takes the edge off of a tragic subject like foreclosure. Finding humor in terrible circumstances can help us to deal with them by changing our perspective, even if just a little.

When a group of people experience a major crisis, you can bet that storytellers will create works that reflect, comment, and critique the issues surrounding that crisis. So, it's no surprise that America's storytellers have created art that explores the subject of the real estate bubble, foreclosure crisis, and the effects it has on people. Lien On Me isn't the only thing in popular culture that has addressed the foreclosure crisis.

The dramatic movie 99 Homes is a fictional story about a recently-unemployed construction worker and single father whose family is evicted from their foreclosed Florida home. In need of work, the father begins working for the corrupt operator who evicted him, kicking other families out of their home the same way he and his family were. A great line from the trailer says "America doesn't bail out losers...America was built by bailing out winners, by rigging a nation of the winners, by the winners, for the winners." That's a powerful statement that many people, who feel they are victims of predatory lending and greedy bankers, and are experiencing foreclosure, might find a lot of truth in.

Also, the upcoming movie The Big Short, based on the best-selling book of the same name by Michael Lewis, and starring Christian Bale, Steve Carrell, Brad Pitt, and Ryan Gosling, shows the financial crash from the perspective of some of the few investors who saw that the housing bubble was about to burst and were able to profit from it. It's set to come out around Christmas, 2015.

Foreclosure is a serious, complex matter, and falling behind on your mortgage payments means that you can lose your home and your good credit. Hiring an attorney who's experienced with foreclosure defense and loan modification gives you the greatest chance of getting the outcome you want. A loan modification, if successful, can lower your monthly mortgage payment to a level you can afford. Even if it's not possible to modify your loan, a qualified attorney can help you get all the time in your home you're entitled to under the law.

In the appropriate context, even tragic events like foreclosure can be humorous and entertaining, but remember to give them the proper respect and consideration when they happen in the real world. So, laugh and/or be entertained when appropriate and be of sober mind when that's appropriate so you can get the best results.