Behind on your mortgage payment? Need a loan modification to save your home? You should familiarize yourself with waterfalls. And not the type from the 1994 Grammy nominated song 'Waterfalls' by the American recording group TLC.

The waterfalls relevant to you as a homeowner in need of help with your mortgage are related to the federal government's Home Affordable Modification Program, or HAMP.

A HAMP loan modification is an option for homeowners who have income but are struggling to make their monthly mortgage payments or aren't making them at all. Often they've had a loss of income caused by a job loss, a medical problem, or a divorce and they fell behind on their mortgage payments because of it.

When a loan is modified with HAMP it's reinstated if it's in default, and the payment is reduced to 31% of the borrower's monthly gross income. There are a number of ways to get the payment to this level, and that's where the waterfall comes in.

When you think of a waterfall, you probably think of something like Niagara Falls where a river flows off the edge of a cliff and falls straight down in one huge step. But HAMP doesn't work like that. It's like a cascade waterfall where the water falls a short distance onto one level of rocks, then over that onto the next level down, and so on all the way down. (Maybe descending a stair case is a better metaphor.)

Whatever you compare it to, how it works is that a servicer applies successive steps, one after the other, until the borrower's payment is reduced to 31% of their income. 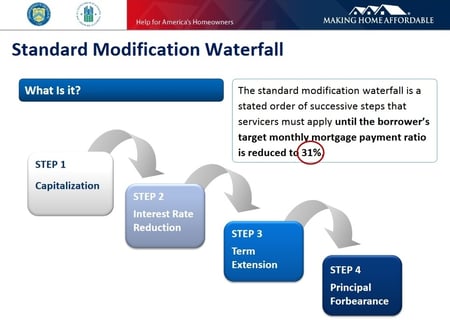 Step 1: Capitalization of the Arrears. The servicer adds the amount you're behind (including accrued interest, escrow advances, and past due payments) to the principal of your loan. Accumulated late fees may not be capitalized. Obviously, adding to the principal doesn't help reduce the payment, so it's usually on to the next step.

Step 2: Interest Rate Reduction. The interest rate is reduced by an eighth of a percentage point at a time until the target payment is achieved or the interest rate floor of 2% is reached. If the 2% floor is reached and the payment is still too high, the next step down will be applied.

Step 3: Term Extension. The term will be extended in one-month increments for up to 480 months, which is 40 years.

Step 4: Principal Forbearance. If the previous steps haven't brought the monthly payment to 31% of the borrower's income, the servicer can defer a portion of the principal to the end of the loan. This requires a balloon payment either when the loan matures or the house is sold. The principal forbearance amount is non-interest bearing and non-amortizing.

There is also HAMP Tier 2 for borrowers who want to modify the mortgage on a rental property or people who have defaulted on a previous HAMP trial or permanent modification. The waterfall steps for HAMP Tier 2 are similar to those for Tier 1, but there's a greater range of acceptable debt to income ratios.

Be aware that you won't get any Home Affordable Modification unless it results in a positive NPV (Net Present Value) for the investor in your mortgage. That means that it has to be more profitable for them to modify your loan than to foreclose. If all the waterfall steps are applied and the payment can't be brought to an affordable level, then it's time to think about foreclosure alternatives like a deed in lieu of foreclosure and short sale agreements.

To be eligible for a HAMP loan modification you must have taken out your loan before 2009, you can't owe more than $729,750 on the property if it's your primary residence (the amount is higher if it's a rental property), you have to document a financial hardship, and you have to have enough income to afford the property.

It doesn't cost anything to apply for a loan modification, although most people who apply on their own are denied.

It's a good idea to consult with an experienced foreclosure defense attorney if you're behind on your mortgage. They can defend you from foreclosure and increase the odds of getting your loan modification application approved. Reputable attorneys are more affordable than you might think. HAMP is expiring at the end of 2016, so don't miss out if you want to take advantage of it. And take TLC's advice and "Don't go chasing waterfalls." Leave that to the pros.