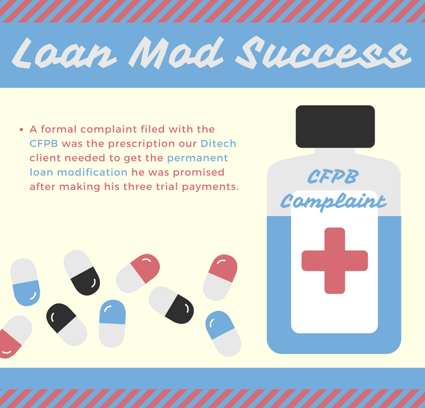 Getting your bank's approval for a trial loan modification is often difficult, but once you get it and make the payments, your permanent loan mod is basically a slam dunk, right?

In some cases it doesn't happen so easily.

A recent client of our firm, who I'll call Mr. Smith to protect his privacy, is a good example of that. Mr. Smith made his trial modification payments on time and in full, and wasn't offered a final loan modification like he was promised. Let's look at his story and what lessons can be learned from it.

Buying A Home As A Couple

It started when Mr. Smith and his wife took out a mortgage for about $400,000 from Greentree (which became Ditech) to purchase a home in New Jersey. The home is close to New York City and wasn't cheap, but the Smiths could afford it. They were both working, and Mr. Smith made a six-figure income at his job. Their mortgage payment was affordable.

Unfortunately, a few years after purchasing their home the Smiths divorced and Mr. Smith lost his job. He got a new job, but didn't make as much as he used to. Despite his best efforts to keep paying the mortgage on the home he and his wife used to share, Mr. Smith couldn't afford it and he fell behind on payments.

This is a story that we've seen countless times. Divorce and loss of income are some of the most common hardships that cause homeowners to fall behind on their mortgage.

The only solution for most people to keep their home following a default is to get a loan modification. A loan modification reinstates a loan and permanently changes one or more of its terms, such as the term, interest rate, and/or principal balance.

Mr. Smith applied for and got a permanent loan modification on his own. Success! The only problem was that, rather than relieve some of his burden with a more affordable monthly payment, the loan modification caused his payment to go up. But since he wanted to avoid foreclosure and keep his home, he took the deal.

Of course, Mr. Smith defaulted on his more expensive, modified mortgage. This is also very common. Many homeowners take any loan modification they are offered because it's the only way to keep their home, then they default again because the payment's still too expensive, and they're right back where they started.

Fortunately, it is sometimes possible to get more than one loan modification. Our client was determined to keep his home by remodifying. He made the smart choice to get professional help this time and hired Amerihope Alliance Legal Services in November of 2015.

We began working on Mr. Smith's Request for Mortgage Assistance (RMA), which is the application for a loan modification. The RMA was accepted by Ditech and entered the review process.

Mr. Smith was served a summons and complaint after retaining our law firm. We promptly filed an answer to the complaint in July of 2016 that denied Ditech's charges and raised affirmative defenses. (Answering a complaint is an important part of a foreclosure defense strategy.)

A case management conference was scheduled by the court, where the parties reported that Mr. Smith was being considered for a loan modification. The judge scheduled another date in the future so the parties had a chance to reach a resolution by themselves, which is always preferable to a decision from the courts.

After the pretrial conference, but before the trial date, Mr. Smith received a letter notifying him that he was approved for a trial loan modification. The letter states:

Congratulations! You were approved for a modification Trial Period Plan.

...After all trial period payments are timely made, and you have met any other applicable qualification requirements, your mortgage will be permanently modified. 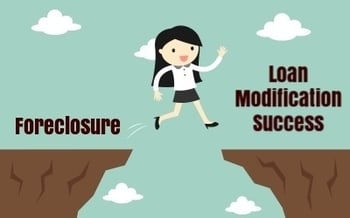 Mr. Smith did as he was told and made his three trial payments in full and on time. After that, the final modification offer never came. Ditech asked him to continue making trial payments, which he did. In total, he made seven trial payments.

Our client wanted what he had earned. Ditech wasn't keeping up their end of the bargain. If you haven't noticed, the banks pretty much do whatever they want. But there is a way to put pressure on them to actually do what they're supposed to.

Borrowers have rights enforced by the federal government's Consumer Financial Protection Bureau (CFPB). When a complaint is filed with the CFPB, the bank is required to respond to it within a certain amount of time. Filing a formal complaint with a government agency can let the bank know that you mean business.

Since we weren't getting the results we wanted for our client by asking Ditech, we filed a complaint with the CFPB, which included copies of the letters Ditech had sent to our client promising him his permanent loan modification once he performed on the trial payments. We also sent a copy of the complaint to Ditech's attorney.

Seven days after we submitted the complaint, we received an offer of a permanent loan modification for Mr. Smith! He signed the agreement and his loan has returned to normal servicing. The foreclosure case was dismissed in the courts, and foreclosure is no longer something he has to worry about.

Mr. Smith was so pleased that he left a review online praising attorney Liu "Margaret" Yang, and the paralegal at our firm who worked on his case. He said he especially appreciated being updated about every detail of his case and having all of his questions promptly answered.

This story ended well for our client. Without the help of the experienced professionals at Amerihope Alliance Legal Services, things would not have turned out so well. We answered the complaint when Mr. Smith was served, attended case management conferences with the bank's attorney, completed his RMA, and filed a CFPB complaint. Each step was necessary to get the end result and keep him in his home.

If you need a loan modification, consider getting help with an experienced professional. It could be the difference between keeping your home and losing it to foreclosure.

Image courtesy of kateen2528 at FreeDigitalPhotos.net