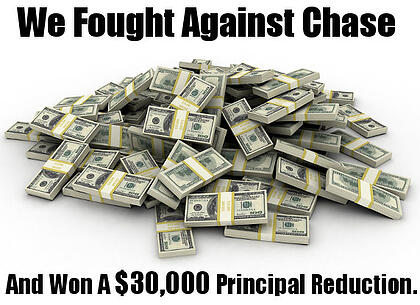 That is exactly what happened to one homeowner who needed our help. He had been self-employed for quite some time, and was able to make it through the worst of the recession. However, business slowed and the homeowner ended up needing to seek out work to help support his growing family. He had just managed to secure a job when he came to us for help in late December 2012, but was already over 9 months behind on his Chase mortgage, and had been served foreclosure just a few weeks before.

When the homeowner completed his trial loan modification payments in September 2013, he was granted a permanent loan modification. His monthly payment was reduced, and his principal was slashed by over $30,000. His interest rate was permanently cut too- from 4.875% to 3.57%.

Our goal at Amerihope Alliance legal services is to provide legal counsel to help homeowners avoid foreclosure and have a more secure financial future. Since 2008, we have helped over 5,000 homeowners save their homes, and we look forward to saving even more homes in the future.