High Power Execs & the Get out of Jail Free Card, a Love Story

In a far away kingdom long long ago... Better yet, substitute kingdom for United 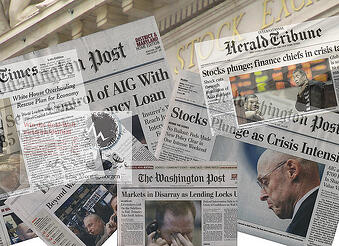 States of America around (more or less) 7 years ago, and brace yourselves for this tragic novella.

Do you remember that time when the stock market crashed (AGAIN) and the whole country thought it was circa 1930's Great Depression part deux. Yeah, you know, that time when the security-backed mortgage bubble burst and everything went down the drain... Sparking a flashback?

And do you remember the people/companies involved? C'mon, I'm sure you do. Do the likes of JP MORGAN CHASE, BANK OF AMERICA and CITIGROUP ring a bell? Of course they do, unless you've been living under a rock since Y2K and keep all your money in a box under the mattress (not judging). But seriously, these head honchos of the banking/financial world were the filet mingon (for lack of better words) of the “bubble burst,” as people like to call it.

Anyways, you (reading this) were most likely one of the unlucky many who, because of insensible practices (I'll elaborate further in a few) from the aforementioned CEO's and company, either lost your home, job, or both, where it all boiled down to one big pool of CEO and speculation induced misery. Clearly I'm not going to blame you for holding just a tad bit of a grudge, right... right?

It's 2008 and the global economy has just gone to ***** (fill in whatever you think appropriate). That resulted in (just a quick, sad reminder) “the threat of total collapse of large financial institutions, the bailout of banks by national governments, and downturns in stock markets around the world. In many areas, the housing market also suffered, resulting in evictions, foreclosures and prolonged unemployment.”

To top it all off, “The Financial Crisis Inquiry Commission concluded that the financial crisis was avoidable and was caused by "widespread failures in financial regulation and supervision," "dramatic failures of corporate governance and risk management at many systemically important financial institutions," "a combination of excessive borrowing, risky investments, and lack of transparency" by financial institutions, ill preparation and inconsistent action by government that "added to the uncertainty and panic," a "systemic breakdown in accountability and ethics," "collapsing mortgage-lending standards and the mortgage securitization pipeline," deregulation of over-the-counter derivatives, especially credit default swaps, and "the failures of credit rating agencies" to correctly price risk.”

BASICALLY, (many believe) intentional fraud committed by the head (banking) honchos up on wall street (paired with a little government oversight) just about ruined the entire American economy. So, last I knew fraud was a criminal act? How come these people weren't held accountable? What's going on here? Why is there not one single CEO behind bars, better yet, the good ol' orange jumpsuit is the new freshly tailored Armani suit!

The answer to your questions is... These CEO's have amazing lawyers (duh!). But seriously, one possibility (a slim one) is that no fraud was committed (except believing that would make you the most gullible person in the universe). Regardless, the people who were supposedly deemed competent to investigate this tragedy, well, they said that no fraud was actually committed (uhm, did they get a massive pay-off to say that?). Even though there were CLEAR signs of fraudulent acts being committed by these top-level execs, no sufficient criminal EVIDENCE that could help prove fraudulent acts was found, and if no proper evidence is found, then the courts can't prosecute.

Overall, to partially justify the crash, the government said it was just a whole-lot of really bad business decisions on behalf of the CEO's. Which brings me to tell you that bad business decisions, even really really really bad ones (ones that cause an economy to jump of a cliff) are not disciplined. How come? What the heck? All the damage that was done and no repercussions for the actors? No, not really.

America's laissez- faire attitude towards business (laissez-faire = an economic environment in which transactions between private parties are free from government restrictions, tariffs, and subsidies, with only enough regulations to protect property rights. ) very much restricts government actions towards private Corps, this lets the Coporations do whatever they want, including really really really bad business. Overall, these companies and CEO's didn't even get a slap on the hand. 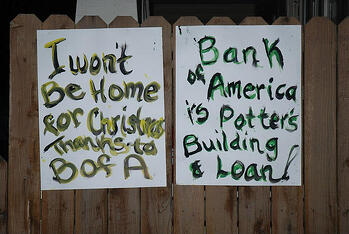 It doesn't end there, in order to further justify, government officials including Attorney General Eric Holder himself told Congress: "It does become difficult for us to prosecute them when we are hit with indications that if you do prosecute—if you do bring a criminal charge—it will have a negative impact on the national economy, perhaps even the world economy."

Oh ok, so then massive fraud is better than completely destroying the United States financial system. Since the financial sector is the lungs of the U.S of A, if we let the financial institutions crumble, then we might as well kiss buh-bye to our national economy... Hmm, makes a lot of sense right?! Honestly, this cannot be more of a double-edged sword situation, where the government picks the less risky side. Just fantastic.

The moral of the story?

The mo' money and power one's got, the easier it is to get away with murder. (Literally)

The end, happily ever after to the CEO's and the get outta jail free card.